Are You Katie Hopkins Or A Human Being?

Another strike day tomorrow. Look out for my custom-made placards. We'll be handing out Heroes chocolates for strikers and supporters, and peanuts to strike-breakers, to subtly symbolise what we're being offered.

Here are my designs - rough and ready but they'll do. 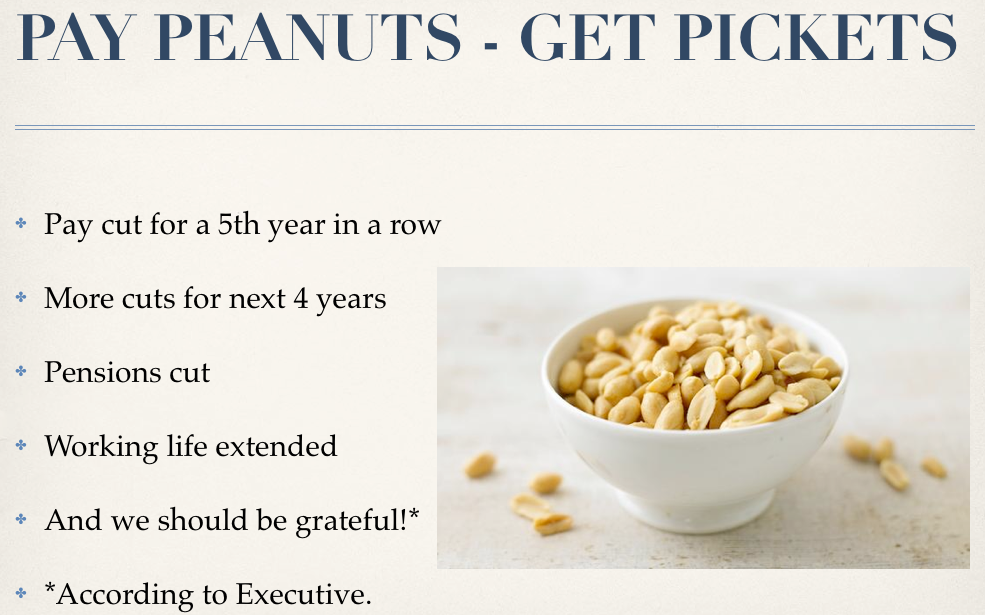 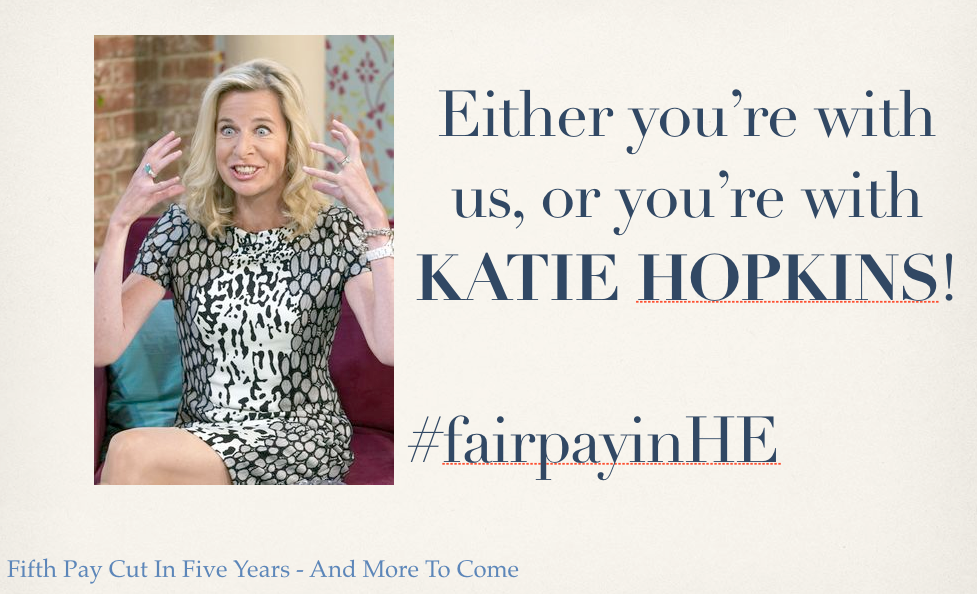 In case you missed it, this is what professional troll Katie Hopkins said about academics and university support staff, some of whom don't even receive the living wage:

Lecturers - get your idle arses off strike and back in the lecture theatres pronto. Be warned.


The Vice Chancellor, in his letter to staff in December 2013, indicated that a 1% salary uplift for staff on nationally agreed pay scales was both fair and consistent with what many other large public and private sector organisations were awarding. In fact, many organisations have not awarded a pay increase for several years and local authorities in our region are having to look at making posts redundant. We believe that our staff, both academic and non-academic receive better pay than many non-HE employees

I'm sure they do believe it. But then what's the comparative group? We earn more than Bangladeshi football-stitchers, but less than dentists. If the university's really starting a race to the bottom, let's start at the heights. Next time the Executives come to renegotiate their contracts, let's say to them 'I'm sorry, but people outside the institution earn less, so we're cutting your pay'. I'm pretty certain that the response will be 'but you need to attract talent'. It's incentives for them, and pay cuts for us.

Let's not forget too that most academics don't get full-time jobs until they're in their 30s. I was 34. So that's no savings, no pensions and no National Insurance contributions for several years while I pursued the 4 degrees required to fully qualify for a job for which the salary is back to 2008 levels, the pension have been savagely cut, pension contributions increased and for which the qualification period has been extended. Not only am I getting poorer, I won't get a pension until 2050, with the distinct possibility of that date getting more and more distant.

How are we going to attract the generation behind me? What are we offering? Bigger Classes – Research In Your Spare Time – Less Pay – Longer Hours – Worse Pension (and if you don't meet your research requirements, you can sling your hook).
Stay classy, education employers!
at 16:29

Brilliant! I'm an academic and I'm striking tomorrow too. Thanks for this great post, which I can use to explain the strike to students and to people outside academia.

I think few people outside the academic world have the remotest idea of the casualisation and insecurity. I was 51 when I got my Ph.D. and a temporary post has a lecturer, 58 when I fell to a publish-or-perish cull. 9Couldn't really work upmuch enthusiasm to add to the academic literature in IR that I found largely useless as a union rep.)

I'm on strike with you in spirit!

You forgot to mention that should you leave academia, or even take a career break, you'll be transferred to the inferior USS scheme that will devalue your pension by about a third...