Reading this blog may warp your fragile little minds.

I feel like I should be wearing some kind of medallion, because I'm clearly a serious threat to public morality. That's right: Plashing Vole is BLOCKED under 02's 'Parental Control' settings. 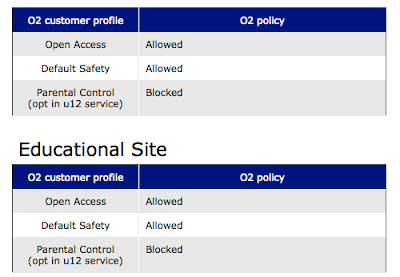 Oh yeah. My stern critiques of Michael Gove, neoliberalism and bad books are TOO HOT for impressionable young minds. Still, I've got a way to go: 02 still thinks this is an 'Educational Site' and adults are still able to read the poisonous filth dripping from my keyboard. I'm not as dangerous as some other depraved sites which have been blocked under the default safety rules: Childline, Refuge and on BT:


"sites where the main purpose is to provide information on subjects such as respect for a partner, abortion, gay and lesbian lifestyle, contraceptive, sexually transmitted diseases and pregnancy."

Oh, and 'esoteric material', which I would hope to qualify for one day. It's fascinating that the primary moral fear in the UK is sexuality, rather than say, violence. What's next though? Once sex has been banned from the internet, will politics and religion become verboten? I think of David Cameron as an even less intelligent version of Dolores Umbridge:

Dolores was as keen on stifling free speech as our current government which – I should point out – ran for office on platforms of increasing civil liberties after New Labour's absurdly authoritarian behaviour. 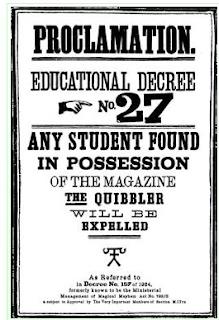 One of JK Rowling's greatest creations, Dolores hides a vicious hatred of dissent, enjoyment, citizen autonomy and freedom of speech and assembly under the guise of concern for morality and young minds. She's a mix of Michael Gove and Mary Whitehouse. In fact, I might start a campaign to rename ISP censorship Dolores' Law.

If anyone would like to test the new Cameron Filters on their ISPs, do let me know if I've been declared a Public Enemy via other services. If you can still get in touch, that is.

My websites robertsaunders.org.uk and northbucksroadclub.org.uk are both blocked too (the latter because it's a subdomain of the first).