For the third week in a row, I have read more books than I've bought. This means that by 2068, I'll have caught up. It's like going cold turkey. No longer do I bound up to the post room expectantly. No longer do I have to avoid the porters and secretaries who've hauled my purchases around the campus with barely a furious mutter about the weight and volume of my book-buying. I'm even – just – managing to suppress the urge to buy everything I see reviewed in the newspapers and LRB.

What have I read this week?

Philip Larkin's juvenilia and collected prose. Very weak.
Colin Harvey's Winter Song: an effective SF retelling of the Icelandic Njal's Saga.
Colson Whitehead's effective and downbeat zombie-apocalypse thriller/cultural satire Zone One.
Nancy Mitford et al, Noblesse Oblige.
And another couple of novels whose names I forget right now. I seem to remember them being quite good but they obviously haven't lingered much. Now I'm on to Hassler-Forest's Capitalist Super-Heroes: Caped Crusaders in the Neoliberal Age. The guy talks a good fight but he's a little sweeping in theoretical terms and limiting his field to films rather than the myriad manifestations of the caped hero is a weird choice. But it's early days. 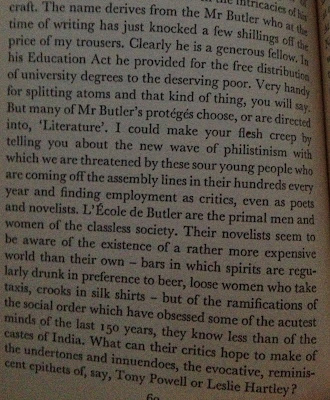