A day in the life of an academic

No, not me: a proper academic. My English department went out for a Christmas meal on Friday and my boss regaled us with his tales of life in the paper mines in the days before his waking hours were filled with Course Journals, SQEC meetings and MSTs.

As a young academic he fell under the spell of the institution's premier Old School Scholar, a man who decided that the students would prefer a lecture on 'Press Variants of the Novum Organum' rather than the scheduled Hamlet lecture… on the day the Education Department inspectors were in. So he found himself in the Bodleian Library, surrounded by multiple early of Delarivière Manley's 1709 The New Atalantis, which was banned and led to its author's arrest for scandal and political transgression.

What my poor boss had to do - at considerable expense - was to feed these extremely rare books into a Hinman Collator: 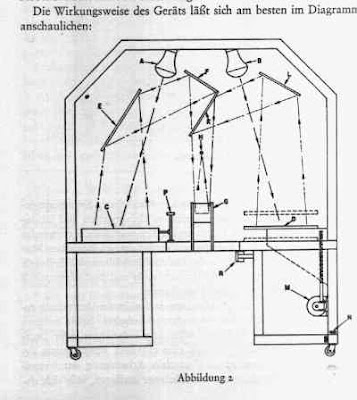 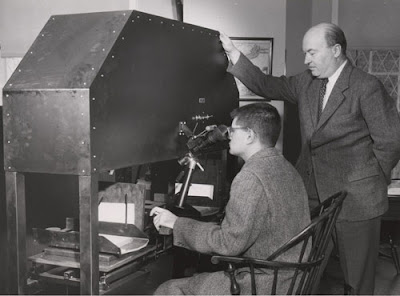 Surrounded by severe, serious literary scholars working away at the library desks, He had to crack open the spines of every copy, weighting them down with heavy glass bars, so that the Collator could superimpose images of pages from each copy using only optics (no computers or scanners), thus hopefully revealing textual variants. Every single page of every single copy available had to be compared. It took the poor man 9 days, a lot of money, a considerable amount of physical pain and the undying hatred of the book-loving witnesses who came to the library every day to see a man crushing ultra-rare volumes in a brutal (and apparently CIA-developed) machine.

Eventually, the Stakhanovite labour was done. Every page had been laboriously compared with its counterparts in every other edition. The textual variants unearthed would provide and insight into the changing cultural, political and intellectual climate of the early sixteenth-century. A career would be born.

The result? A single, solitary semi-colon's difference. He could have wept.

Which is why if I'm anything, I'm a literary critic rather than a textual scholar, but I admire the dedication of such individuals: in such tiny elements worlds are made and re-made. I recently read Claudia Johnson's wonderful Jane Austen's Cults and Cultures, which starts with the author agonising over where a comma should go in one of Austen's sentences: the first and second editions of the novel varied, and it was Johnson's task to decide whether the re-sited comma was an error, an editorial decision or an authorial change, and which version was more 'authentically' Austenian. That's an admirable academic career, despite the mockery of the greedy and superficial people who moan to us about the 'real world'. The hunt for the stray semi-colon is literary criticism's equivalent of the Higgs Boson or the quark: apparently quixotic, elusive and abstruse, but also demanding, revealing and crucial for us all.

So to Johnson, my boss and all the others currently engaging in textual intercourse: happy Christmas. More power to you all.
at 11:25