Slumming it with the historians

This is my last comment on the US election for now. Though I'm sure I'll get sucked back in before long: 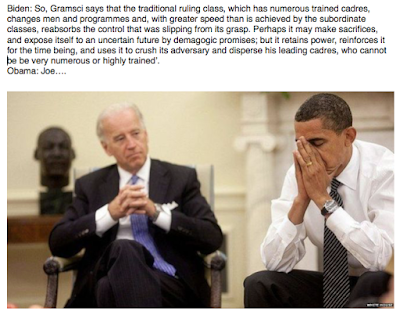 I liked the Joe Biden prank meme: Biden acquired a reputation as the proletarian tough-guy foil to intellectual Barack Obama, which I am sure is far-removed from the reality, but the double-act worked well. I chose this Gramsci quote partly to suggest that Biden's a clever guy, but partly because I think Gramsci is right: élites survive by appropriating the energy of challengers. Trump's not part of the political class but he's long been the court jester for the economic élite: either Washington will use him as a puppet as happened to Boris Johnson when he was mayor of London, or he'll fall from grace spectacularly. My suspicion is that Trump will be the TV president who barks out orders then quickly forgets what he's said while his appointees will commit acts of great evil with dedication and determination.

Anyway, enough of that. What have I done in this week, given I'm on sabbatical? Well, the week started with the Digital Campus Research Focus Group, NSS briefings and various other committees. Then I saw students. There were union meetings, an interview panel to attend, a course committee meeting, a school meeting with the Dean and several unscheduled other duties. But one colleague gets a small reward for uttering the previously unheard words 'actually I'll ask X as you're on sabbatical'. In fairness, all my colleagues have been great but the structure and the pressures from above, especially in small departments just don't allow for things to be put off or passed on.

That said, I have been to a couple of very enjoyable events. The History department hosted Richard Evans one night, and Dominic Sandbrook in conversation with Keith Gildart the next. I remember reading Evans's counterblast against postmodern historiography – In Defence of History – many years ago and finding it highly enjoyable and thought-provoking but also very very wrong. His talk this week gets filed under the same category. It was very old-Oxbridge: it takes 6 weeks to write a book, you draw on the books in your office and on the famous experts along the corridor, and you never ever talk about historiography if you want to keep your readers. Evans is a wonderful speaker: no notes, very funny, tightly structured while appearing to be spontaneous, but essentially anti-intellectual in that classic English empiricist style.

One thing that linked the two guests was the nature of being a popular historian. Evans isn't a TV-and-tabloids historian in the way Sandbrook is, but his work is classic narrative history and he talked extensively on how he (and his notorious agent Andrew 'The Jackal' Wylie) made a fortune from the History Boom by writing clear, uncomplicated and emotionally-moving work: his history of Europe 1815-1914 starts each chapter with a biographical vignette of an ordinary person (serf, soldier) in recognition of the 'history-from-below' movement, and he abolished footnotes entirely. Sandbrook does a lot more TV and writes for the Daily Mail, largely producing work which stresses the continuities of British cultural history in a rather conservative and nationalistic way. I chaired the conversation between him and Keith Gildart, our prof of Labour History who wrote a history of English popular culture which takes the opposite tack. Sandbrook thinks popular culture is largely Victorian, that the 60s didn't make much difference to most people, and that the mythology of the Swinging Sixties and since works by excluding unfashionable or conservative popular culture, and that the cultural economy is and always has been controlled by the rich. For a Daily Mail writer, he's very close to what we used to call a 'vulgar Marxist' analysis: dependent on economic structures, sales figures and fixed definitions of class, without much analysis of content or context. There are also lots of snide comments about intellectuals and theorists which are rather unnecessary. 'Life's too short', reads one footnote.

There are things to agree with: the chapter on Catherine Cookson persuasively argues that the books little old ladies read in enormous quantities deserve serious consideration as popular culture: not a surprise to me as a Cultural Studies academic, but worth making. It was revealing, however, that Sandbrook admitted that he'd never read Cookson until the TV show producer proposed including her in the series: while Sandbrook is widely-read, keeps on top of historical debates and academic work, once his choices are made in this way, you become (in Heffer's words) 'a man who writes about the past' rather than an historian.

Gildart's work covers similar, though narrower ground, but from a different perspective. He writes the 60s/70s music scene as the site of working-class re-evaluation of the post-war condition of England, and rather than just looking at the content of songs, for instance, he's interested in what fans and subcultural groups did with them: where they congregated, how they responded with fan-art, fashion, fighting and identity formation. He draws on interesting sources, such as the letters page of Jackie magazine to get a sense not just of what people bought, but how they thought about where they went and what they did, and of who they were. Highly-influenced by Raymond Williams and the Birmingham School, it envisages a working-class that used popular culture both to understand the continuities of their contexts, but to explore new formations and structures of feeling.

We ran the event as a conversation between two historians with different approaches to the same ground. Dominic went from boarding school to Oxford, then to popular history and media work after a short stint as a lecturer; Keith was a miner in the North East Wales pits for several years before rejoining academia via Northern College. As they very neatly put it: Dominic's family watched the BBC, Keith's watched ITV. Both have strong reservations about each other's historical practice and interpretations, but they explored these ideas and conclusions in thoughtful, generous respectful and often very funny ways, with me occasionally putting the boot in by asking why England was the sole paradigm, and how discussions of 60s popular music and class could totally ignore Cilla Black, Dusty Springfield and Shirley Bassey… The questions and observations from the audience added richness to the discussion and it all carried on in the pub afterwards.