Death by a thousand sequels

I'm drowning in work this week: mostly induction talks and trying to find out where the students who missed induction talks might be and working out how many students we actually have and whether that's an astonishingly good number all things considered or an astonishingly bad one and where we're going to teach them and whether there's an ethical or moral problem with teaching (e.g) the Holocaust while lounging on the bean bags furnishing our new teaching space and so on and so forth. In a word: your normal Freshers' Week. The bright spot is meeting new students – my admittedly limited contact with them leads me to be hopeful.

In the midst of all this, I've managed to do some reading and listen to some music. Thanks to a friend's performance from memory of Sonic Youth's grossly offensive yet seductive 'Tunic (Song for Karen)' (Carpenter, that is) and the discovery that I don't actually own any of their LPs – possibly part of the vinyl haul I sobbingly sold during the Great Teaching Hours Drought of 2003) I've acquired several in one go:

So far the one I'm enjoying most is Goo, followed by Experimental Jet Set, Trash and No Star. Which reminds me: Dinosaur Jr. released a new album last month that I still haven't bought. The other album I've just acquired is an NMC release of Emily Howard's compositions. I remember a few years ago looking through my classical section and realising that I didn't own a single piece of music by a female composer other than a collection of Hildegard of Bingen sacred settings. Having read Joanna Russ's wonderful How To Suppress Women's Writing I knew that there must be oceans of good music out there, lost, silenced, unperformed or unpublished and that I'd missed out badly, so I've started seeking it out. I haven't yet been disappointed, though some is less to my taste than others. Howard's great: she has a background in maths and science, and her music tackles the forces that drive the universe.

Amongst the recent discoveries, I've really got into Pauline Oliveros. An accordionist into drone electronica: what's not to like?

I'm also very partial to a bit of Sally Beamish, particularly her Viola Concerto: much more classical modernist than experimental, but moving and thought-provoking.

And now to books: this week I've read one good one and one terrible, shameful waste of ink. The good one is Anthony Burgess's A Dead Man in Deptford, a beautifully written – speculative – romp through the short life and untimely death of Christopher Marlowe who in this novel loves boys, poetry and pub brawling, but is less keen on spying and the violent deaths that ensue from his espionage activity. There are walk-on parts for Shakespeare, Greene and various other contemporaries, and it's written with a nod to the speech, vocabulary and orthography of the day. I wouldn't rely on it to write an essay on Marlowe but it's diverting and thoughtful.

The terrible book I read saddens me. I loved Curtis Sittenfeld's American Wife, her fictional, imaginary biography of Laura Bush: it had so much to say about American, sexual relations and power. It led me to read her other novels too, including Prep, a fascinating look at the chilly schooldays of the WASPs. And so, liking Sittenfeld and being an Austen nut, there's no way I wasn't going to read her retelling of Pride and Prejudice, entitled Eligible.

Not that I was entirely starry-eyed: I have already read several Austen retellings that did no good for my blood pressure. I'm happy to admit that Clueless is by far the best adaptation I've ever seen: a perfect example of how the spirit of Austen's social structures and plots can be reproduced without slavishly photocopying the original. The worst one – by far – is PD James's 'sequel' to P and P: Death Comes to Pemberley, in which the characters assemble while the killer of Mr Wickham is sought. Reader: I cannot remember reading so dreadful a novel, especially one by a long-established, acclaimed author. It's like PD James had a personal grudge against both Jane Austen and the English language and sought to do to them what she does to Mr Wickham. The original Austen mash-up, Pride and Prejudice With Zombies is far, far more faithful to the spirit and style of Jane's work, while Bridget Jones's Diary (Bridget, like me, is unfairly mocked for being a graduate of Bangor University's very fine English and Linguistics department) wears its debt to Austen both visibly and lightly. The other one I rather like is The Price of Butcher's Meat, Reginald Hill's Dalziel and Pascoe police procedural retelling of Austen's fragment Sanditon.

I thought that Death Comes was the worst anyone could do to Austen until I started reading Eligible. I thought that given Sittenfeld's excellent track record in anatomising upper-class American life she might to a decent job. It's set in Cincinnati, which must be the equivalent of Netherfield – self-regarding, provincial, smug but rich. Mr Bingley is now 'Chip' Bingley, a wonderful doctor who appeared on a series called Eligible (modelled on Love Island) but not entirely willingly: his 'manager' is his sister Caroline. Darcy is a pompous surgeon, and the Bennet girls are older than in Austen's original, and their social situation is rather different. Lizzy is a style journalist, Jane is a yoga instructor, Mary's a permanent student probable lesbian and perhaps even a feminist (outrageous!), while the younger two are foul-mouthed gym bunnies. Mr Bennet has recently had a heart attack and Mrs Bennet is a shallow shrew. Essentially it's like buying a posh car to discover that someone's ripped out the good bits and added go-faster stripes, bucket seats and a Trump bumper sticker. It manages to maintain Austen's attack on snobbery while being supremely snobbish.

Worst of all, however, is the writing. I cannot adequately convey the awfulness of the dialogue, from the abysmally-failing attempts to make Mr Bennet and others sound dryly witty, to the obsessive addition of 'she said' or 'he said' to every utterance as though the implied reader cannot follow a conversation even if it lasts no more than two sentences.


“That wasn’t bad,” Liz said. “Especially for someone who scored as low as you did on the verbal part of the SATs.”
“Stop quarrelling, girls,” Mrs Bennet said. “It’s unbecoming.”
“They’d never speak to one another otherwise,” Mr Bennet said.

It's not a satirical reproduction of degraded Cincinnati posh parasites' slang: it's just cloth-eared, crude, leaden, lumpen and patronising. Austen may be conservative and didactic but her wit and intelligence shine through in ways that Sittenfeld – in this novel anyway – can't manage.

I own Joanna Trollope and Val McDermid's Austen's retellings in the same series: I'm now dreading reading them. There's a long tradition of appropriating characters, texts and plots to do something new with them – in the 18th century people didn't even wait for authors to die before rushing out cheap and unauthorised sequels to best-sellers – and many of them are successful on their own terms. Eligible may just have cured me of the habit of reading them. Though I have just bought the Manga Emma. 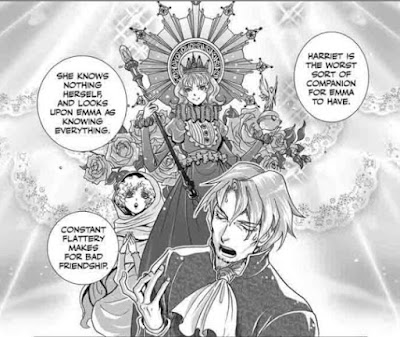