Hi everybody. As it's a while since I updated the world with the activities of my local MP, elusive millionaire fantasist Paul Uppal, here's a bumper edition. You'll laugh, you'll cry, you'll vote to throw him out in May 2015. 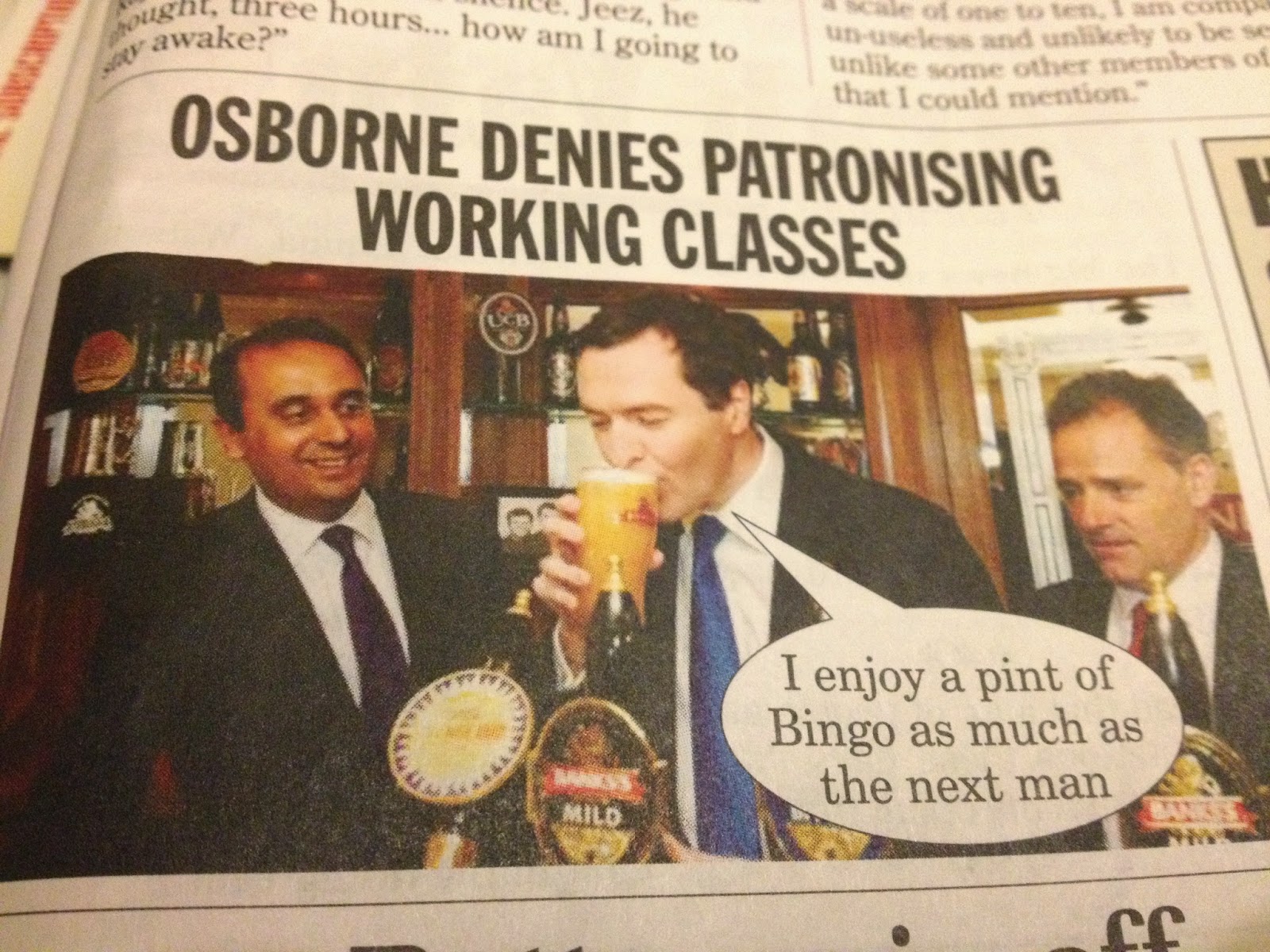 Insult of insults, they don't even deign to mention who the 'next man' is. But we know, readers. We know. Incidentally, I haven't seen any mention during the Beer/Bingo coverage of the long-standing working-class suspicion of the continuing links between the Conservative Party and the brewing industry. There were even songs about it. Here's Paddy Ryan's 'The Man That Waters The Workers Beer':

Now when I makes the workers' beer,
I puts in strychinine,
Some methylated spirits and a drop of
paraffin,
But, since a brew so terribly strong
Might make them terribly queer,
I reaches my hand for the water tap,
And I waters the workers' beer.

Now a drop of good beer is good for a
man
Who's thirsty and tired and hot,
And I sometimes has a drop for myself
From a very special lot;
But a fat and healthy working class
Is the thing that I most fear,
So I reaches my hand for the water tap
And I waters the workers' beer.

Now ladies fair beyond compare,
And be it maid or wife,
O sometimes lend a thought for one
Who leads a wandering life,
The water rates are shockingly high,
And meths is shockingly dear,
And there isn't the profit there used
to be
In watering the workers' beer.

And if you've ever tasted Banks's beer (where George and Paul did their gruesome duet) you'll understand where the song comes from.

Anyway, that's enough of the comedy. Paul next popped up on Channel 4 News during a piece on why Asian voters aren't turning to the Conservatives. The obvious answer ('Paul Uppal') sadly wasn't featured, but after a quick chat with Paul's dad (presumably no non-relatives could be found to endorse him), we got some words of wisdom from the great man himself. And what words they were! In perhaps the most audacious instance of inclusion and revisionism in political history, Paul found a way to claim that Enoch Powell, his notoriously racist predecessor in the constituency, would have been pleased that Paul is the MP. You could have knocked me down with a feather. Enoch Powell predicted race war if immigration into the UK wasn't stopped (he later went to Northern Ireland to represent the unionists who'd immigrated into Ireland by force, demonstrating a keen sense of irony). To claim him now as some kind of kindly integrationist is beyond bizarre and into the realms of dishonest. Personally, I'm very pleased that Tory voters in the area are now prepared to vote for an Asian candidate. I just wish a) it wasn't Paul and b) they'd consider not voting Tory. But to appropriate Powell: breathtaking. To mix ethnic cultural references: that's chutzpah on a grand scale.

Finally, Paul also has a job as Parliamentary Private Secretary to the Minister for Higher Education, presumably a reward for his bravery in voting for £9000 tuition fees despite having a majority of 619 and a university serving the economically disadvantaged in his constituency. A while back, I wrote to him asking why the government hasn't projected HE funding streams beyond 2016, a break with normal behaviour. My suspicion – shared with education guru Andrew McGettigan and many of the experts I spoke to at an HE leadership event recently – was that it's simply because they have no clue and have given up. Instead, they've savagely reduced the teaching grant and slashed the support funding for disabled students, which I think we can all agree is the mark of a competent and classy administration.

Anyway, Paul wrote back saying that he couldn't currently answer my question and would get back to me later on. (In case you don't know: MPs have to respond to sensible letters from constituents and more people should take advantage of this). Teasing aside, this seemed perfectly acceptable to me: there wasn't any indication of slipperiness. A few weeks later, a substantial letter arrives. 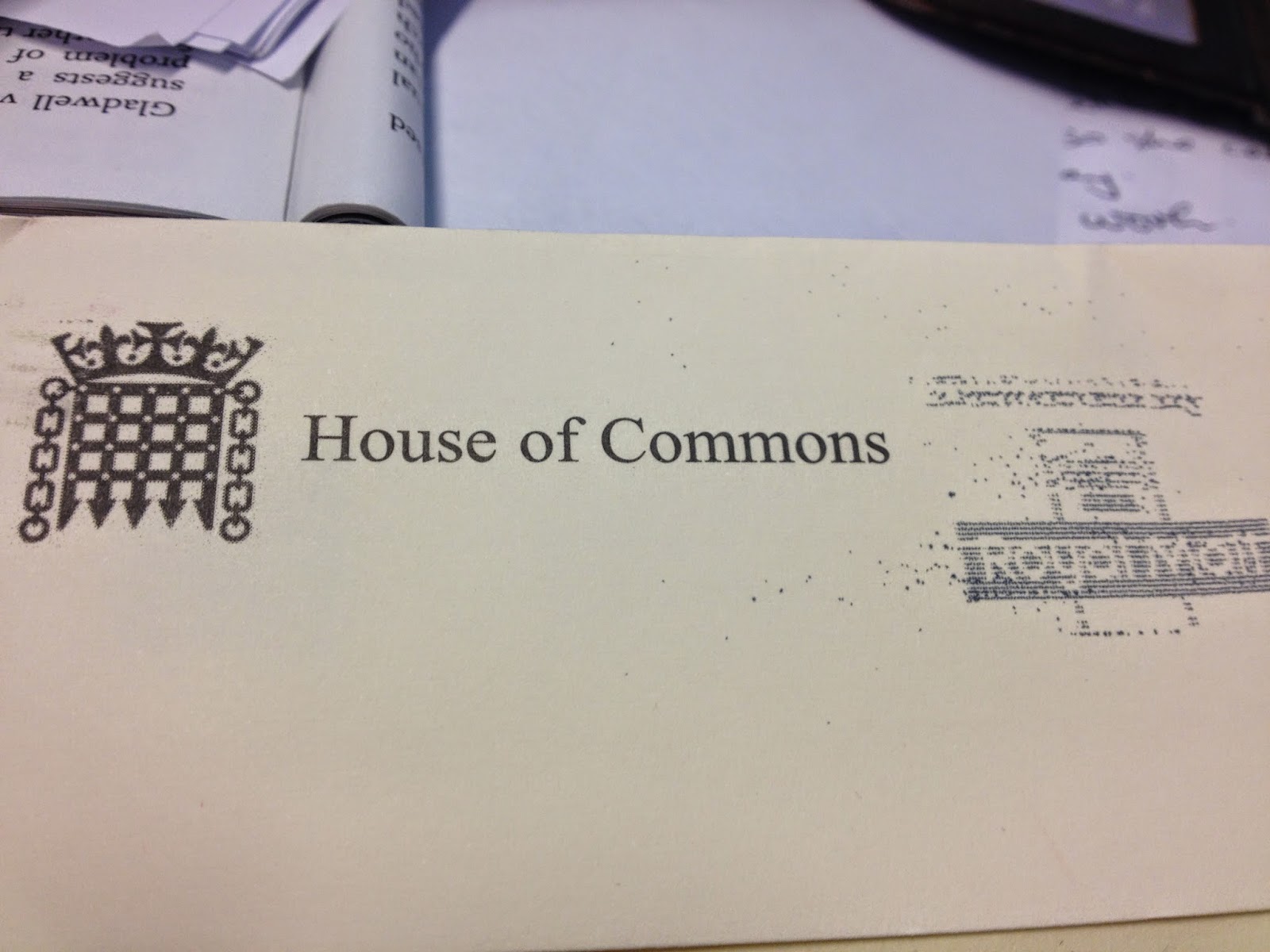 The first paragraph is the normal waffle about HE being a paradise:

The principal aim of our reforms was to put higher education on a sustainable footing for the long-term. Our universities are now well funded and this is driving up the quality of the student experience while helping to stimulate economic growth. What is important is that we have protected our world-class higher education system; we have not deterred students from participating in HE and we have increased the participation of those from lower income backgrounds.

Then we get on to the details.

As you are aware, the government has announced its intention to realise value for the taxpayer through sales of English pre-2012 income contingent student loans. The loan book will be sold in a series of tranches over a number of years. The first tranche of loans is expected to be sold by the end of financial year 2015-16. However the decision to proceed with first sale has not yet been taken. As is normal with transaction of this type there will be a value for money assessment made before each sale.

'Realise value' of course means selling the student loan debt off to financial institutions. It automatically incurs a massive loss because the banks will calculate the non-repayment rate, build in a profit and offer the government a price far less than the face value. But it moves a debt figure on the government current account to an entry on the income list – essentially exchanging a reliable future income stream for the equivalent of a payday loan. As you can probably tell from the undertone of this paragraph, there's a considerable amount of uncertainty about whether the government actually can flog off the loan book. As non-repayments approach the 48% level at which the whole student finance model becomes economically pointless, the banks reckon it's a dog and aren't queuing up.

The department will ensure that sales from the pre-2012 ICR loan book represent value for money to the taxpayer. A refined model has been developed to provide an accurate forecasts of future repayments. This will be used by government and purchasers to assess the value of the loan book. In reaching a sale decision, careful consideration will be given to the comparison between the value of the sale and the value of retention.

We'll have to trust Mr Uppal about the value-for-money model because he doesn't provide it and I presume it won't be made public at all. Let's hope that their model is better than the one which led to the disastrous Royal Mail giveaway (disastrous for us, not for the Tory donors who snaffled up the shares at a bargain price before flogging them on at a huge profit).

Current market conditions are favourable and BIS advisors have confirmed there is potential interest from a range of buyers in investing in the loan book. This has informed the estimates of potential proceeds of approximately £12 billion over a five year period. It has been calculated that the additional outline of loans for the expansion of students numbers over the forecast period will be more than financed by proceeds from pre-2012 loan sales. If the sale of the loan book does not go ahead or does not provide the expected receipts, The Treasury will need to consider the impact on public sector net debt. This will be a wider consideration of the state of the public finances, but will include the affordability of higher student numbers.

I'd love to know what makes him think market conditions are favourable. Graduates aren't repaying their loans because the country is in a deep recession; jobs are low-paid and often part-time, and because graduates are filling positions previously open to non-graduates. We are running a low-wage economy, quite deliberately. Labour did it, and the Conservatives are extending it, because their primary concern is corporate and elite profit, not sharing the wealth.

The second half of that paragraph bothers me. The Conservative Party recently removed student numbers from the existing university sector and transferred them to the private HE sector to kickstart it: not to improve the quality of education but an ideological act designed to damage existing institutions which are viewed in Conservative circles as Marxist enemies of freedom. An astonishing range of institutions appeared as if by magic, some of them very flaky indeed, and overloaded the student finances to such an extent that an emergency cap then had to be re-introduced. Now the cap is supposedly off again but nobody I've spoken to knows what on earth is happening. Clearly that last line refers to the possibility of numbers being cut again - and we all know that unfashionable former polytechnics like mine will be hit hard, while private and elitist universities will be protected.


The higher education finance projections are aligned with other areas of government expenditure in not going beyond the final year of the current spending review period, 2015 to 16. These reforms mean that higher education institutions on how well funded; this has been sustained through recession and is driving up the quality of student experience. Students now have a greater stake in their learning and their future but can expect to be protected should they go on to learn low incomes and do not repay their is loans in full.

I'm not entirely convinced by the argument that projection are in line with government methods. Universities are large, complex organisations which require stable and predictable funding arrangements, as governments have long understood. At the HE leadership seminar I attended, one finance director described the HE funding model as OK for universities but bad for the country, and I can understand their perspective. The system is in fact an accounting ruse, not a policy. After all, university funding has actually dropped (fees don't increase in line with inflation, other funding streams have been abolished) and been shifted from the state to the individual.

I find the last couple of lines particularly depressing. I really resent the idea that students need £50,000 of debt to feel that they have a 'stake' in their education. It fails to recognise the innate benefits of higher education, and denies that students understand their education as contributing to the public good. Instead, it implies that education is simply a means to individual enrichment: the custom mentality writ large.

I'm pleased that Mr Uppal took the trouble to write a substantial reply to my letter. I remain troubled, however, by both the economics and the ideology contained within. I hope you all write to your MPs asking for further enlightenment – and vote accordingly.

Update: HE finance expert Andrew McGettigan has unearthed the contradiction between this letter and what MPs were told. Read it all here.