I've mentioned my deep and enduring hatred of The Big Bang Theory before. It's partly disappointment (that a show about academics and science is so lazy), partly annoyance (I had Green Lantern and Flash shirts years before the show appeared but now get accused of 'copying Sheldon') and partly because it seems like such a cynically constructed appropriation of subaltern groups who seem cool with it. I know this because I attended a conference on science in fiction and crowds of scientists seemed delighted at their representation. Every time I said 'they're laughing at you' or 'the show's attitude towards women is disgraceful' they chanted 'but they get the science right', which rather proves the show's attitudes correct, I suppose. 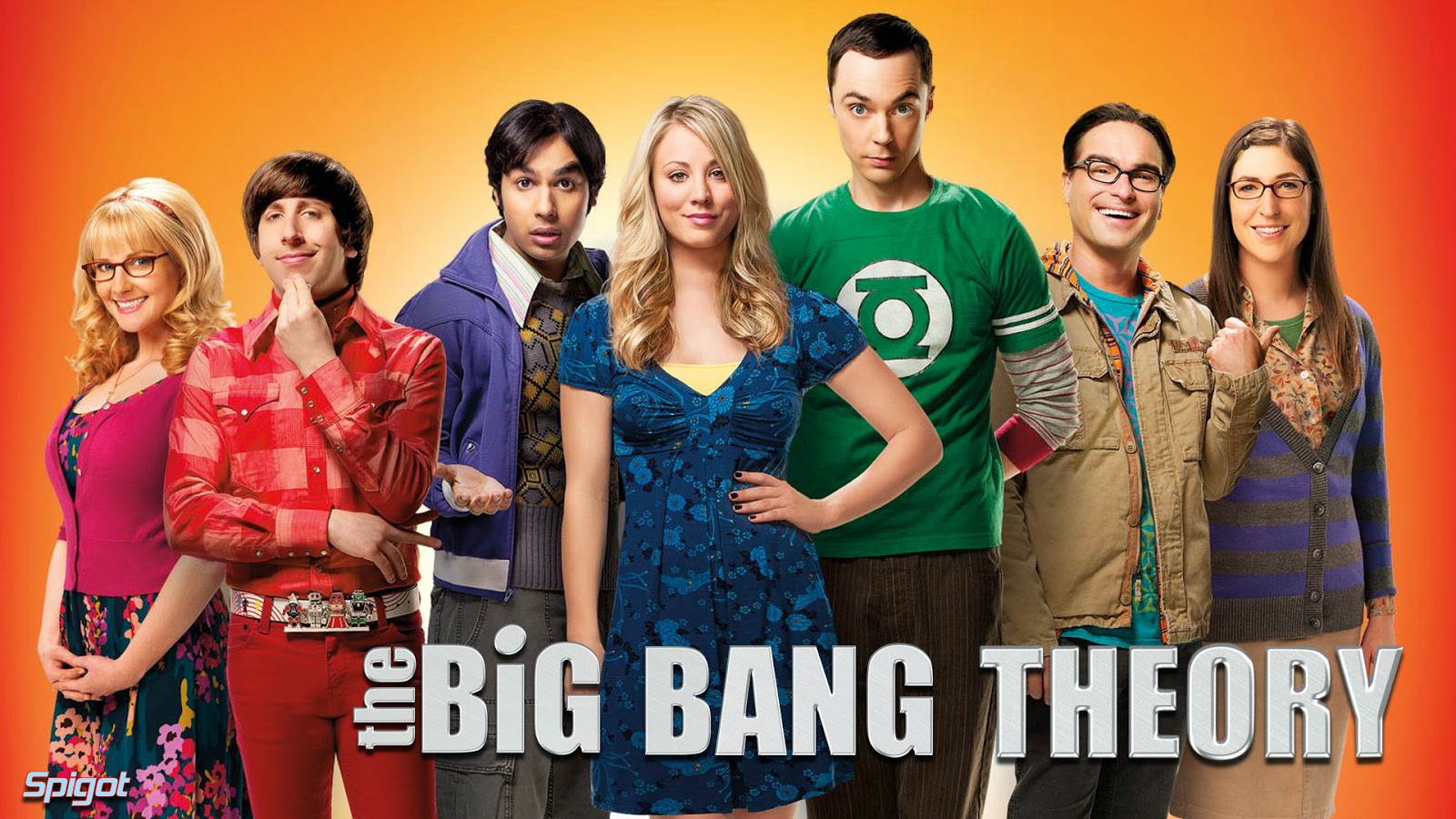 If you haven't seen BBT, then you don't own a TV. It's a sit-com featuring a number of post-doctoral scientists, their friends and occasionally their families. The core group are male: one is Jewish, one Indian and one autistic Texan who escaped a Christian fundamentalist upbringing (it seems like clever Indians are OK, whereas African-American scientists are beyond the realms of plausibility). They have troubles with girls, one may be a repressed homosexual, and their female friend is Penny: blonde, Middle-American and stupid but with a heart of gold. And large breasts. Other women sometimes appear: similarly autistic scientist played by former child stars of Roseanne and Blossom. Howard's mother (heard not seen) is a domineering Jewish stereotype. Core obsessions are 'geek culture', carefully delineated by the products frequently displayed on screen and guest appearances by semi-hip SF/comic characters. 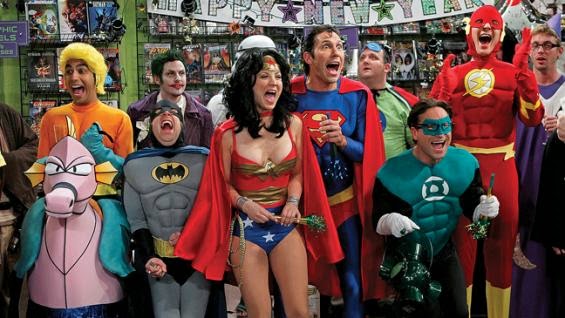 The basic comedy runs on these lines: scientists are socially dysfunctional and indulging in an extended adolescence; mothers are oppressive harridans; blonde working-class girls are lovely, dumb and sexually available; academia isn't 'the real world; female scientists aren't classically attractive; foreigners are funny as long as they're in on the joke. The genius of BBT is that it's a very stereotypical 1970s-style show disguised as a progressive one. The main method by which this is achieved is the show's apparently approving approach to science. The main characters are physicists, astrophysicists and engineers (psychology and biology are for girls, the show makes clear). Texan Sheldon's defence of evolution in spite of his family's creationism is used to demonstrate BBT's adherence to Progress.

The show's theme song appears progressive too: a history of human scientific inquiry and achievement, though I find it smug and rather evasive about the darker side of our collective history: here it is with the lyrics.

I see it puts bipedal creatures ahead of dinosaur extinction, but at least it promotes the Big Bang rather than Creationism. However, apart from the reactionary nature of the humour (we're clearly meant to desire and empathise with 'normal' Penny rather than the nerdy scientists), the show infuriates me because despite its apparent liberalism, it's actually in deep denial about the most pressing scientific issue of the day: climate science. Caltech, where the characters work, has a large and important environment and climate science programme, yet none of them work there. Nor is climate science ever mentioned in the show's seven series so far, despite virtually every other branch of human enquiry coming up at some point.

How do I know? Because some obliging person has posted the transcripts in searchable form on the web. See for yourself. The word 'climate' does not appear. 'Environment appears 9 times, but almost always with the meaning of social surroundings. Though there is a dismissive reference to hydroelectric power in Series 5, Episode 9. 'Global Warming' is mentioned once: a character's ex-boyfriend is in town to present a paper on the subject, giving rise to the comedy of jealousy. Clearly he is both a threat and a loser. Carbon appears only as an element, and 'greenhouse' doesn't appear at all.

Why does this matter? Because BBT is the only popular show dealing with science in the English-speaking world at the moment. Because it presents itself as scientifically accurate and cutting-edge, priding itself on scientific accuracy and relevance. It's important because popular culture is what the young watch: not news, or documentaries. Popular culture forms the cultural and intellectual horizon of the next generation, and if an entire field of inquiry – perhaps the most pressing one of our time – is excluded from popular culture, it becomes invisible or suspicious. Sheldon Cooper goes on about M Theory constantly, a theory which many physicists feel has no status as a theory because it cannot be tested. It's abstruse, it's difficult and it's hip (it's also fascinating and amazing). It's also conveniently apolitical: because it has no ramifications beyond a blackboard, it's safe. In Big Bang Theory's world, it's perfect: science is about 'cool stuff' (the ISS or personal gadgets which can be 'product-placed' on screen), or about concepts so far removed from its viewers' lives that they can be rendered the subject of unthreatening humour. The last thing that CBS wants is cool scientists who might be looking at tangible, inconvenient truths. Science, BBT announces, is occasionally magical but largely the preserve of nerds who live in a bubble. Let's point and laugh at them. They're cute, but largely irrelevant.

The exclusion of climate science cannot be an accident, but is a decision made on financial and ideological grounds. CBS, which makes the show, is owned by industrial conglomerate Westinghouse (now CBS Corporation) and has censored analysis of the tobacco industry in the past. Westinghouse owns massive power generation resources including fossil fuels and nuclear plants: clearly it won't tolerate any pro-climate science commentary on its channels. Add to this the public hostility to climate science in the US and you have the reasons why this deceptive show is silenced. From this show, nobody would ever know that there is any problem with the climate, or that tens of thousands of talented scientists are working hard to understand and fix it, right now. In this light, BBT's silence isn't an omission: it's a deliberate intervention in a pressing political and scientific issue.

It features scientists in a role other than one-dimensional vehicles for the exposition and the scriptwriters have actually bothered to acquire a rough understanding of what the hell those characters are supposed to be talking about. For a show with any sort of mainstream appeal that's very nearly unprecedented.

And yes, I dare say it is still patronising stereotype-riddled crap. (I don't have a television, so I haven't seen it.) But it's a start.

Totally agree with you here; the current trend and fashion is all about geek chic, and everyone's lapping it up with a straw. Most of my friends that watch the show and laugh at all the Star Trek references have never actually watched Star Trek. It's a hypocritical show that is not revolutionary for those that actually do suffer from social anxiety, but rather mocks them in a cool new Hollywood kind of way.