Vodafone: they literally don't get the message.

Receiving an unwanted promotional text from Vodafone today, I thought I'd respond with an equally unwelcome message: 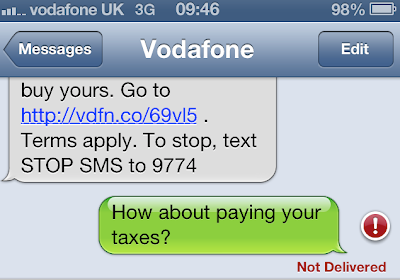 'Not delivered': that'd be right.

Vodafone, in case you missed it, is one of the world's most egregious tax avoiders. Any trick they can think off, they pull. In the end, a private deal with the head of HMRC (of very dubious legality, let alone morality) let them off a £6 billion bill.

We're also used to the idea (other than in the banking sector) that CEOs of global companies are very clever men (they are all men). Perhaps this is erroneous. I watched an interview on Channel 4 News yesterday in which Eric Schmidt said two interesting things.

He said that Google wouldn't be paying any more taxes than required (carefully not mentioning that his entire global corporate structure is set up to move profits to no-tax centres through chicanery) because Google does lots of 'philanthropic work' (tossing a few crumbs rather than being a responsible corporate citizen) and that the UK government had to get the economy going through a much greater financial stimulus (5.33 onwards). 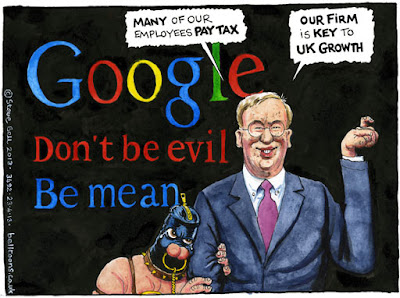 Where does Eric think governments get their money from? He's a very clever man. Surely he knows that money comes from taxes. So basically he's saying that those of us who can't hide our money offshore should bail out those – like him – who can.

There's a word for people like Eric, but this is a family blog. But here's a thought: if Google paid local full corporate taxes in the countries where profits are made, perhaps our libraries wouldn't be closing, our hospitals sold off and our infrastructure failing. Increasing your profit margins by deceiving the taxman isn't innovation or any of the things business textbooks talk about. It's just parasitism.
at 10:22