So, this weekend in between cooking delightful food (braised leeks in thyme and white wine, on a bed of pearl barley one night, followed by a zingy lime dahl the next), I went to see A Late Quartet, starring Christopher Walken, Catherine Keener, Philip Seymour Hoffman and Mark Ivanir.

The plot is pretty simple: a string quartet is faced with an uncertain future when its oldest member, the cellist, is diagnosed with Parkinson's disease. Deciding whether to split up or replace him, all the tensions inherent in a quartet's symbiotic relationship over decades come to the surface. Disagreements over interpretation, over musical style and over the pecking order suddenly press on them just as they're dealing also with the emotional impact of loss. Added to this is a series of other pressures. Cellist Peter is a recent widow; the marriage between violist Juliette and second violinist Robert is under considerable strain. Meanwhile, metronomic first violinist Daniel's robotic carapace is cracked by his tempestuous affair with Juliette and Robert's talented but screwed-up daughter.

All this is conducted (sorry) under the pressure of practicing Beethoven's String Quartet 14, op. 131. It's a weird one, as the film very impressively discusses. Seven movements instead of four, no breaks in between so that the performers have to cope with all their instruments going out of tune in different ways…  it's a quartet about emotional and musical maelstroms, about dependence and trust and adaptation to your colleagues. So it's a nice conceit to go with the plot (and admirably performed by the magnificent Brentano Quartet, with the actors miming with some success.

The last time I saw Philip Seymour Hoffman in a film, he was sawing off someone's fingers while on a plane (or something) in Mission Impossible III. Likewise, while I've loved Christopher Walken in many many films, he mostly sticks in my mind for and Sleepy Hollow, in which he played the decapitated and  murderous ghost of an American War of Independence German mercenary: 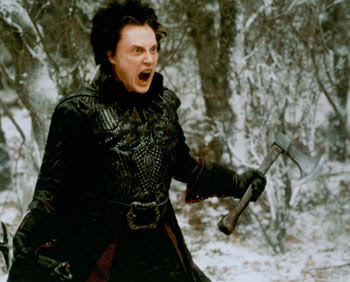 So I was intrigued: how would these esteemed character actors whom I've only seen playing psychopathic loonies cope with the sensitivities of a High Culture part? The answer, actually, was admirably. Walken is controlling, hurt and entirely in thrall to music regardless of his comrades' emotional turmoil. Hoffman is pretty much perfect as the egotistical, insecure second violinist, convinced his wife has never loved him, itching to be the soloist. Catherine Keener is distant, controlled and yet convincingly torn between the demands of music and the requirements of a family life, while Mark Ivanir is perhaps best of all as the rigid perfectionist leader.

And yet… it doesn't quite work. The film's shot like one of the Woody Allen's wonderful 70s New York films: snow, Central Park, rich white European-American New Yorkers facing the profound questions of life and creativity. But the film can't decide whether it's a middle-brow soap opera with some fancy High Culture stylings, or a High Culture film with a soapy sub-plot. The main problem is the affair between student Alexandra (played by Imogen Poots) and Daniel. She's a spoiled brat who feels like Mummy and Daddy never loved her enough because they were away with the quartet too much. She's preternaturally mature in some ways, yet hysterically teenage in others. By the time she tells her mum that she should have had an abortion rather than try to juggle motherhood and music, I was done, at least with this sub-plot. It's a shame really: the music world is rife with relationships between teachers and their proteges, and the UK music scene is being ripped apart at the moment following the revelation that music teachers have sexually abused, raped or coerced some of their students. The isolation, the intensity of the bond between maestro and élite student is ripe for exploitation and misunderstanding, yet A Late Quartet doesn't explore this: the sub-plot feels like an excuse to get some young flesh, a 15 certificate and a bit of relief from the endless discussions of bow marks, Beethoven's feelings and phrasing.

I'd have gone the other way. There are plenty of films out there with firm young buttocks, car crashes and alien invasions. I watch a lot of them. So why not have the courage to make a film which is only and unapologetically about two fascinating subjects: the dynamics of a quartet as it faces change and the emotional power of a wonderful piece of music? Something for grown-ups? My cousin is the lead violinist and last remaining founder member of the Vanbrugh Quartet and have recorded the entire Beethoven Quartet cycle: I'd love to ask him how they've handled the transitions between members personally and emotionally.

The attempt to widen the film's appeal by adding a soap twist and young flesh didn't work, by the way: there were 11 people in the audience. Of these 11, I would like to commit grevious bodily harm on several. If you deliberately go to watch a film based on a piece of music's emotional power and relevance, and the closing credits play the whole thing for the first time in the entire film, WHY WOULD YOU GET UP AND START TALKING OVER IT THE MOMENT THE SCREEN GOES BLACK? YOU REALLY MISSED THE POINT,  YOU MORONS, AND RUINED MY ATTEMPT TO LISTEN TO THE WHOLE THING. Honestly, some people belong in camps.
at 11:03

Email ThisBlogThis!Share to TwitterShare to FacebookShare to Pinterest
Labels: A late quartet