Bath, Bad Books and Beyond

January is always a weird month here in academia. We're still in Semester 1 but it's an assessment period: no lectures, no seminars but occasional individual tutorials with students mixed with marking (now online, to my chagrin), little daily structure but a lot of demands. When the semester ends we have a week to finish marking and prepare teaching before Semester 2 starts - in my case case reorienting what little remains of my cognitive functions away from The Book of Mormon, The Passion of New Eve, children's literature and assorted American literatures towards the European renaissance: Shakespeare, Webster, various sonnetteers and pamphleteers, plus all their Italian and French influences. Simultaneously there's the BBC novels project to work on, plus my books on masculinity in Welsh writing in English and politicians' fictions to get on with. And of course dissertation supervision, PhD vivas, course leadership and all the pastoral care that doesn't show up on workload allocation forms but very much does show up, in tears, at my desk at regular but unpredictable intervals. Pressured though all this is, it's also enjoyable - no day is the same.

Away from work, I've managed to partly block out the general misery (world on fire, local MP – who has blocked me from his Twitter feed – banned from Wikipedia for editing out the more inglorious episodes of his career, general gloom) by visiting Bath, riding my bike and (of course) reading books. I took some pictures in Bath which you can see here. 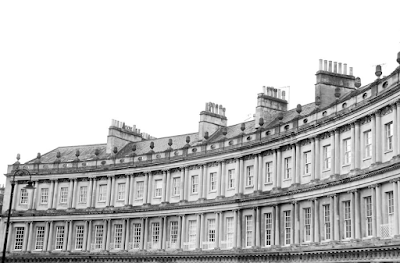 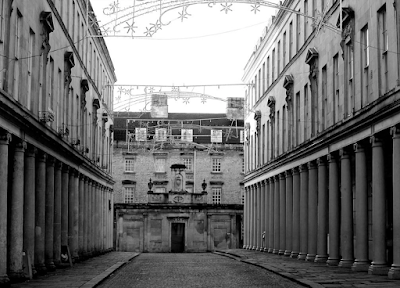 Despite Jane Austen's horror of the place (she makes Mr Tilney describe it as 'the most tiresome place in the world whereas romantic dimwit Catherine loves it, and Austen refers in a letter to 'another stupid party'), I liked it: good food, good company, good bookshops, fine walking and the palpable presence of a counterculture challenging the deep sense of privilege. The Roman Baths were astonishing so much remains, history piled on history giving a striking sense of the way the Romans and their successors merged spirituality with commerce: the 'wellness' ethos avant la lettre.

I also went to the local council's cycling forum last night. An all-white, all-male and (other than me) all 60+ affair, it encapsulated citizenship in the best and worst ways. The best of it was the way a group of people volunteered to give their time up to help improve the city. They were highly-informed, altruistic, thoughtful people with a commitment to local and global environmental improvement, and they had practical, constructive ideas which the council officer considered and debated with respect. The downside was the homogeneity of the group, a function of wider structural conditions for which those present can't be blamed. The result, however, is that without wider representation, decisions will be made without consideration of other perspectives. This city is a traffic-clogged hellhole: only the hardiest (or foolhardiest) brave its multi-lane ring road, dangerous junctions, damaged road surfaces and psychopathic drivers on a regular basis. Enthusiasts like me will always take a chance and literally have the scars to prove it, but to make this place better it needs to be a safe and pleasant environment for cyclists of all sexes and backgrounds and speeds to take their rightful place. Not present in the room were all those people who'd like to commute by bike and choose not to, and a way needs to be found to take their views into account.

As far as reading goes, only the two books this week: Haruki Murakami's Dance Dance Dance and Alissa Nutting's Tampa. I read most of Murakami's novels in the 1990s when I was young and (slightly) less embittered. I enjoyed the whimsicality, the mixed genres, the tinge of magical realism and the protagonists' slightly obsessive characteristics. If I'd read Dance Dance Dance then, I think I'd have rated it as one of his very best. As a quest novel, it works very well: the quest is of course whimsical and obsessive but it's also emotionally complex and not entirely resolved. There's some good humour, often at the author's expense: 'Hiraku Makimura' is a washed-up author character. With the benefit of experience though, I struggled with the protagonist's and the author's sexual and gendered attitudes - even if we assume that the protagonist isn't meant to be uncritically admired, the plot, resolution and attitudes are relentlessly misogynistic. The women are all waiting for a man, waiting to be sexually available, tarts-with-hearts or bafflingly out of reach. Dead women's bodies abound, too. There's no doubt about Murakami's ability to create a world and a character, but he clearly can't manage to empathise or understand women.

As for Tampa, it came close to being the first book I've never finished. I should have known it would be bad when I noticed that the cover blurbs were by Irvine Welsh and Alex Niven - the self-styled bad boys of literature. Hailed (by them) as a female Lolita, Nutting's novel follows a term or so in the life of a female paedophile and school teacher, Celeste, as she entraps a couple of 14-year old boys before exposure inevitably befalls. There's a vague attempt at psychological justification of Celeste's condition (first sexual encounter was with a 14-year old boy, fixing her idea of perfection, and her marriage is loveless) but it's perfunctory at best, and much of the novel is badly-written pornography. I'm not convinced that it's deliberate, an attempt to reproduce the damaged psyche of a sociopath: it's an endlessly repetitive series of encounters without the mechanical drive of a Ballard, Ellis's early work or Moore's Lost Girls.

Lolita, disturbing as it is, has style and structure. Tampa is just one unlovely word following another until we get to the end. If you want confrontational women's writing taking on previously male-dominated subjects (and you should: plenty of men get to publish books about bad things, often bad books abut bad things), I'd suggest Helen Walsh's Brass and Belinda Webb's The Clockwork Apple instead. Walsh's latest novel is about a woman's affair with a 17 year-old boy: I haven't read it yet but I'm pretty certain it's less exploitative and more intelligent than Nutting's effort. Tampa fails because it has nothing to say really, beyond the obvious fact that women can be paedophiles too. Celeste has no origins, no social context, no causes: she's just a monster to be judged (but enjoyed first, it seems). So what?

I actually regret reading this novel. I don't often feel that my time's been wasted despite having read an enormous amount of forgettable or meretricious work in my time, but this one just didn't justify the paper. If you're going to address something important and shocking, you've got to do it well. This didn't.