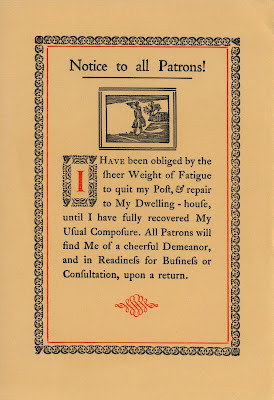 I am going on holiday. To Ireland of course, packing Factor 50 and a thick pair of gloves for use on the same day, if experience teaches anything. I hope to defy Judge Dredd by swimming in the Black Atlantic, take some photographs, read a lot of books, admire the goat on the tower and write my upcoming conference paper on Carol Ann Duffy's period as poet laureate (why yes, holidays are for doing the work you don't get time for otherwise). This evening is set aside for the pleasurable task of deciding which 20 novels make it into the suitcase – every year I intend to buy an e-reader and every year my pointless scruples about Amazon get in the way.

The last day at work finished on a slightly sour note: I went to a presentation on employee engagement, which featured a lot of warm words, some rather misleading graphs, the proud announcement that we now have an employee engagement 'branding and logo', and the astonishing assertion that a university can be ethical, caring, empowering and engaging while – as is being discussed – 'outsourcing' entire sections of the staff. Apparently you can fire the lowest-paid employees, contract a company to employ them and make a profit for itself, save money and adhere to your 'values'. I wondered out loud whether any senior management posts were being 'outsourced', which was deemed an unhelpful contribution.

Other universities, such as Birmingham and some London colleges have gone down this route. It means that you have a two-tier workforce: managers and academics on semi-secure contracts and decent salaries, and an army of the lowest paid, doing the worst jobs, stripped of any legal, moral or communal ties with their workplace. What always happens is that the former employer declares that working and contractual conditions won't be affected. They always are, at which point the university/hospital/school declares that its hands are tied because it doesn't employ these people.

My university has Fair Trade status: I don't see how this is commensurate with washing one's hands of the most insecure group of colleagues. Why should the people who cook our meals, patrol the grounds, keep the computers running and empty the bins be deemed external to the ancient ideal of the community of learning? This move has gone down very badly at other institutions and I hope that if it happens here, everyone from Professors and Executive Directors down will be on strike in solidarity. I can dream I suppose: the cause of this nasty little plan is that, like every university, we're struggling financially and like those in the vanguard of the sector, it's those given least who will be expected to give most.

Sorry, that's a gloomy way to end the academic year, but it profoundly depresses me. Universities should have the confidence of a millennia's existence and aim for the moral and social heights, rather than take on the most discredited, vicious and short-termist aspects of more recent organisational models just because the sea has become choppier. Idealism is only meaningful when there's a cost - there's nothing more nauseating than a highly-paid 'leader' explaining to those on the minimum wage that sacrifices have to be made, and oh look, it's them. Again. Let's hope it doesn't come to that.