You may recall that under its previous guise of The News of the World, Murdoch's flagship Sunday paper hacked the phones of murdered children, people in the public eye and people who might vaguely know people in the public eye. It, and its rivals, conducted a reign of terror: Charlotte Church, aged 13, was induced to sing at Rupert Murdoch's wedding with the promise that it would give her better media coverage than she might otherwise expect. The Sun is of course notorious, amongst other things, for claiming that Liverpool fans urinated on and robbed the bodies of their dead at Hillsborough, under the headline 'The Truth'.

And now, in a very minor but unsettling way, it's my turn.

I just had a call from a Sun on Sunday 'reporter', to whom I declined to talk: he turns out to be the political editor, and was formerly (surprise surprise) in the same post at the News of the World. He, or someone with his phone number, has read my Twitter feed or blog (it's not entirely clear which) and has discovered that (shock, horror) I've utilised these media to make exaggerated and striking analogies about Conservative politicians for satirical effect. One of them was this tweet, in response to Theresa May's vow to make Britain 'hostile' to undocumented migrants, and her appalling appearance on the Today programme during which she completely failed to provide any evidence for the scourge of 'health tourism'.

Not my wittiest retort, I have to admit, but I'm a private citizen (of partly Jewish descent) with a sense of horror at the government's decision to load the ills of society on some desperate people yearning for a better life. Exaggeration for comic effect is a recognised satirical technique, one which is de rigeur on a medium like Twitter which is all about catching the eye (almost like a Sun headline, one might say), and one sanctioned by authors such as Jonathan Swift for one.

Apparently I've also said something disobliging about Iain Duncan Smith, which sounds very likely. After all, who hasn't cursed this proven dissembler? It doesn't matter particularly that I didn't make the statement, but passed on a picture of this letter to the New Statesman by one of IDS's old teachers: 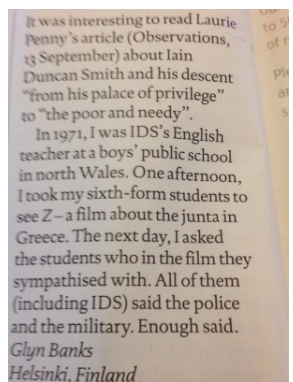 Their crack investigative team has also discovered that Labour Party Member And Academic Doesn't Think Much Of Paul Uppal And Margaret Thatcher. They're very upset that I accuse MP Paul Uppal of playing the race card, while overlooking my point that he once referred to the campaign for racial justice as 'the McCarthyite race relations industry'. Even more hilarious, they're really upset that I called the Daily Mail evil.


‘Meanwhile, the Daily Mail has finally gone off the deep end. It's always been evil, but now it's added wild and vicious idiocy to the mix’

Just to remind you: this is the Daily Mail that accused Ralph Miliband of being 'evil' for disapproving of the public schools and the monarchy, but who nevertheless fought for the UK against fascism. Intellectually and socially, I'll never reach the heights of Ralph M, but I'm proud at least to be smeared in a minor way by his phone-hacking, thieving, pornographer enemies.

I'm just disappointed that it's hack David Wooding on the case and not the Fake Sheik. Oh well, to be monstered by the Sun is reward enough for me. Though you do wonder whether Jimmy Savile, for instance, would have been exposed earlier if the Sun etc. had dug as deeply into stories about him as it has for non-stories about little old me.

Hold the front page. It must really be a slow news day. The Sun on Sunday also tells its readers that I call myself 'vile' and 'emotionally dead', which regular readers will recall was a comment made about me by a friend, and which I reproduce from time to time in the spirit of humorous self-deprecation.


‘Oh. Vile is what I'm aiming for. And 'emotionally dead' is what I was once called. I saw it as a compliment’

It is shocked to discover that I a) have a job and b) am a member of the Labour Party (about which, I should point out, I'm regularly critical). The Sun has also contacted the Labour Party and apparently I'm being 'investigated'. What that means, who can tell?

What does matter is that while the Sun on Sunday is calling press regulation an attack on press freedom, it seems to have decided that I shouldn't simultaneously have opinions it doesn't share and keep my job. In support of this slightly bizarre position, it's wheeled out a rather tragic little Tory MP by the name of Conor Burns, who is calling for me to be sacked. The Sun claims the MP came to them (that's right, a Bournemouth MP who doesn't like the views of a person from nowhere near Bournemouth automatically phones a national tabloid to draw attention to me).

But what's this? An informant draws my attention to a newspaper article about poor sensitive Conor, the man who thinks people who make tasteless jokes should lose their jobs:


A FOUL-MOUTHED Tory candidate sparked outrage by branding hecklers "spastics" and calling a woman a "hunchback."

First, he described a woman who edits the student union magazine as the "hunchback of Glen Eyre," after the name of her hall of residence. Then, as barracking continued, he turned his venom on his audience calling them "spastics."

What was Conor's defence?


"I was exasperated by the preposterous Left-wing views and disorderly behaviour of the Labour party. "There was an extremely hostile and intimidating atmosphere. I did remark that they were spastics - but I immediately apologised."

Did he resign as a matter of principle?


But I am a fighter and I will certainly not quit

I don't think I've been that offensive, so I don't think, on balance, that I'll quit either. I use 'Plashing Vole' as my online identity not to hide myself from criticism, but to distance my employer from my sharper opinions. I occasionally grumble about The Hegemon and its quirks, but I love working here and feel respected as an academic and colleague. It has never sought to silence me and I try not to embarrass it. The university's view is that I can be as idiotic as I like on my own computer as long as I'm not claiming to speak for the institution. For a newspaper to decide that citizens with opinions should be hounded out of their jobs seems frankly McCarthyite: the Red Scares in 1950s America included a sustained assault on academic freedom. For what it's worth though, I apologise whole-heartedly to my colleagues from the VC down for wasting their time with this nonsense today. With HE under such pressure from all angles, they don't need to be distracted with this stuff.

So when the Sun and its allies complain about assaults on freedom of speech, this is what they mean: that minor academics buried in the provinces should be fired from their jobs and expelled from their political parties because they pithily express their opinions. O Brave New World!
at 15:53

We're with you, Voley! I count this as a badge of honour that you should wear with pride.

Zoot Horn comes back from the dead to defend your sharp, witty and democratic critical outpourings to the death Vole!

Stay with it, star.
As the great J P Donleavy said in 'The Ginger Man' "Shit will be shit on judgement day".
PS And keep dancing. I wasn't there but I have it on record!

Glad to see Burn is on the case, working for the people of Bournmouth to make sure that no vile academic from Wolverhampton can have an opinion. His website is instructive, and demonstrates how hard he has been working. In fact, he is so hard working, the newsfeed can hardly keep pace. He has done two things in the last eight months, in fact. He has "visited a train depot" and has "pledged to speak out against the stigma of dementia." So proud of our public servants.

I think therefore I am - attacked by the sun?

Congratulations, they must have decided that you were making some sense and so decided to put a stop to that sort of nonsense. Keep the red vole flying

Sounds like something to be proud of! Voley, no pasaran!

Badge of honour. Have you checked your voicemail recently?

I recently read Peter Toads (I know, but they put 'highlights' in the free paper that comes through my door) describe this blog as 'excellent'. I suppose the universe needs to balance itself out in some way and there had to be at least one odious right wing rag after your blood.

I've always enjoyed reading your tweets and blog and it goes without saying that I think you are a fine writer and thinker. But now the Sun is gunning for you I love you and am so jealous you are stirring things up. Your voice, distant yet strong, has obviously stung someone, well I say, GOOD keep stinging them and sharing your thoughts with all your admirers. Great stuff!

Insane workloads have kept me from Twitter for several days so I've only just caught up with this nonsense. I'm glad the university is supporting you (quite rightly, but not always a done deal). Is this the best that they can come up with: 'academic is left wing'?

Try not to worry. Following a hearty breakfast and a character-building walk around Windermere, the average reader of this journal of record will be far too distracted in analysis of the personal interests of 'Debbie, 18, Southend' to give this tawdry hackjob their full attention.

It will be rolled up on the dashboards of the nation's transits in no time.....

Congrats on joining the ranks of the monstered!

You have to admit that David Wooding has to find something to do whilst gearing up his support for forthcoming court case involving many of his present and former colleagues.

Why not a bit of make believe? It's all the rage in the tabloids today - the economic situation means they cannot afford proper journalism hence their dislike of Leveson.

Ed of blog comments past supports you wholeheartedly Vole. Also: yesterday I spotted Paul Uppalling outside The Hegemon. Had little at hand to throw at him unfortunately.

A badge of honour indeed, though I'm sorry about the likely inconvenience. Also be careful. Many years ago a friend of mine had his house staked out by the Mail, and when he went out to remonstrate the guy pulled a gun on him.

So the Sun on Sunday decide to perform some hatchet surgery on you just as the ASA investigation into Grant Shapps' web business is finally “resolved informally”? Anyone might wonder what their regular contributor, Mr Schapps, makes of it all...

Well., I've never read your blog before until signposted here from Historian At The Edge, but if the Sun wants to censor you in the name of freedom of speech, then you have my support.

iParrot Post is a global read and reporting news platform that enable users to post their account of events witnessed, worthy local and International news. iParrot Post is a breaking news portal.iParrot Post exists to provide independent news and information to the masses, comprised of news feeds from around the world. We enable our users and subscribers to submit local News that they see as important. It is also a portal to allow users and subscribers to comment and contribute to the News events of the day.
Worldwide News UK
English UK News
Local UK News
UK Political News
English British Sports News
Business UK News
Breaking UK News
Technology UK News