That David Cameron letter in full

Here it is, folks. Despite the greeting and signature being printed copies and the actual mailing address being a light industrial estate in Croydon, it's a 'personal' letter of thanks for the Prime Minister: 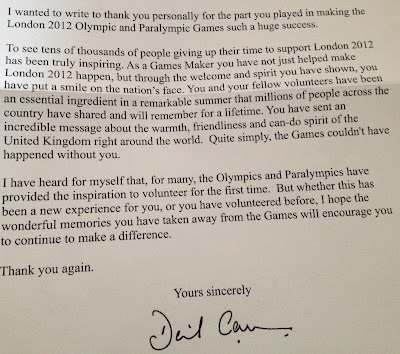 Obviously the letter will be framed and hung proudly on my wall next to the injunction from Paul Uppal, but I'm going to view this as the opener in an exchange of letters which will hopefully continue throughout David's (he used my first name, so he must want to be friends) administration and beyond.

Here's the text of the letter I'm posting him later today.

Dear David,
thanks very much for the 'personal' letter you sent me and tens of thousands of other Olympic and Paralympic volunteers. Like you, I found the Games inspiring and uplifting although unlike you, judging by the numerous references to 'the nation' and 'the United Kingdom', I didn't view the event through a nationalistic prism.

Sadly, not everyone at the Games was a volunteer: I gather that Lord Coe, for instance, has made many millions of pounds through his role, has secured a lucrative further post, and of course continues to have a vote and a voice in an unelected legislature. Can I also take the opportunity to ask whether your friend Mr Murdoch paid for his tickets when he accompanied Mr Johnson and when he met Mr Hunt? I distinctly recall Mr Hunt making joking references to his News International shenanigans during an Olympic Park speech to School Games participants, many of whom had recently lost their EMA thanks to your preference for cutting millionaires' taxes over helping deprived children remain in education. The idea that the CEO of a company which avoids paying corporation taxes should receive free tickets while volunteers like myself bought our own tickets is a little hard to take.

I regret also that many other potential volunteers were excluded from the games for financial reasons: taking training, travel and other expenses into account throughout the Games' cycle, I calculate that volunteering cost me about £1500: only three times as much as you charged the taxpayer to clear wisteria from your constituency mansion, but a lot of money nonetheless. I could afford it, because I'm middle-class and well-paid, at least by my standards if not yours. A further excluded group was the unemployed: although 2, 500,000 are chasing 500,000 jobs, any unemployed Games Maker would have been sanctioned for not 'actively seeking work' during summer.

Rather unfortunately, the 'Big Society' of Olympic Volunteers was literally and figuratively fenced off from the rest of the East End. Within the barbed wire: shiny new architecture, bright colours and the logos of companies notorious for variously depressing wages, deskilling employees and sanctioning the disabled with little sense of natural justice. Without the wire: unrelieved poverty and decay despite your promises of physical and social regeneration. I fervently hope - without much expectation - that the promised post-Olympics transformation of East London will amount to more than importing Tory-voting aspirants into not-actually-affordable starter apartments while leaving the low-waged poor to fend for themselves or be exported to poorer cities far from their families and social networks.

I will of course continue to volunteer, and not only through my own sport. Thanks to your economic policies, my city has several food banks and similar services to which I can lend my talents. Personally, I don't think that's something of which to be proud, but presumably you see this as the Big Society in action. Your education, social, health and environmental policies also look set fair to generate plenty of opportunities for voluntary action in future: caring for the unprofitable sick scorned by privatised healthcare, remedial education for those spat out by the 'free schools' liberated from the requirement to provide healthy food and qualified teachers, or restoring the natural heritage you are so keen to put into the hands of jerry-builders and fossil-fuel despoilers.

As for you, John Profumo was rehabilitated through many years of quiet charitable labour. I suggest that you do the same, and the sooner the better. I don't know if you've ever seriously done any voluntary work other than the usual photo-opportunities and CV-polishing required of young politicos, but I suspect that I and many like me have already contributed and will continue to quietly contribute more than you ever will. I very much look forward to the day - in May 2015 or (perhaps!) earlier - after which you will have plenty of time to devote to voluntary activity.

Yours with all the respect and sincerity you deserve,
Plashing Vole.

This is wonderfully hilarious Vole. Love it. Bravo. You've put a smile on my face today!

Pleased to be of assistance. I had fun writing it.

A perfect letter. I bet his staff make sure he never sees it in case he has a tantrum.

Cynical me also wonders which one of his mates has the lucrative contract to send out these "personal" letters and how much they are getting paid...