Thanks to the gods of the research budget (they play with us for their sport), I'm away all next week – sitting in the Gladstone Library trying to get on with turning my ancient and pedestrian PhD dissertation into a book. This should be a little more advanced, but my six-week sabbatical this semester was almost as badly impacted as my collar-bone was when I got hit by a car: this week away should help me catch up a little.

Sadly the Gladstone's accommodation is fully booked so I'm in a b-and-b across the road and won't be able to stay in the library in the evening, but it will still be good. I'm hoping to take a bike for those balmy evenings, but they're both in for repair at the moment and I'm not sure they'll be ready in time. One of the difficulties about having a rare one is that the bike shop lacks the specialist tools. What you gain in geek-points, you lose in practicality. And money.

This week has mostly been about course admin - trying to set up next year's modules without knowing what the timetable is or who's available to teach - and counselling students ahead of the resubmission day next week. Students fail for a wide variety of reasons and I have an awful lot of sympathy for most of them (and most seize the opportunity to have another go with good grace and effort), but some do try one's patience. Sending me a draft for comment that is clearly and crudely plagiarised seems rather cheeky, as does airily admitting that one hasn't read the text being written about. This is now Slide 1 of my Hamlet lecture. 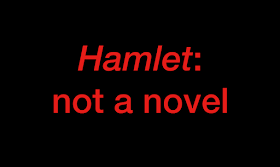 Anyway, enough of that. On with the apologies. A week or two I expressed my frustration that certain very senior and entirely imaginary colleagues had wreaked havoc, behaved unethically, and failed upwards to other institutions under cover of NDAs, pay-offs and good references. I am assured by one who certainly knows that this is not the case - a relief, and evidence that perhaps I am sometimes too cynical. There's still the issue of what happened to effective oversight and accounting, but I'm happy to correct the record. And to my readers in the posh seats: just rattle your jewellery. (And while you're here, ask yourselves this: despite posters all over the place referring to the 'digital campus', why can't a course leader contact every student on a course, or in a particular year on a course, in one go?).

I've found a bit of time for other things. Sunday saw me doing refreshing my welfare officer and child protection qualifications for fencing - mostly quite repetitive, but there's a new emphasis – or panic around – social media. Perhaps understandably, governing bodies, like the law, struggle to keep up with the scary new possibilities raised by the plethora of platforms especially in the hands of the young and enthusiastic, and those with sinister intent. Thankfully the current training doesn't try to be exhaustive: keeping it simple and thinking ethically are the key aspects.

Books: only a couple this week. Stephen Baxter's H-Bomb Girl was entertaining, witty and convincingly situation in early-60s Liverpool, and well worth the 99p I paid for it in The Works. The new Kevin Barry novel Night Boat to Tangier is great - a very consciously Beckettian piece about two witty, charming, dapper, washed-up Irish psychopaths. Full-on Corkonian Hiberno-English dialogue, absolutely minimal narration, struggles to generate female characters with the same rich interiority – the women are wives, mothers, daughters, copers and escapees, but lack agency (though as the Beckett influence is strong, almost nobody has much agency). I'm currently most of the way through Peter Ackroyd's The Death of King Arthur. It's a long time since I read Malory, but I think he's managed to reproduce the structural jumpiness, Arthur's savagery (his Herod-style massacre of the infants, for instance) and the uninterest in character development rather well, despite – or perhaps because – cutting two-thirds of the story out. I'd forgotten too how close to the surface the Celtic-style ritualism is in Malory's very Anglo-Norman text.
at 15:51
Share