Farewell Tristram, we hardly knew you

The resignation of Jamie Reed MP to spend more time with his mildly radioactive money was hailed on the right as evidence that 'sensible' (i.e. besuited capitalist) Labour MPs were flinging themselves from the sinking SS Corbyn. Strikingly absent was the critique of this opportunist shill, just as not a word was said when Tony Blair appointed Paul Drayson to government: a man who never once deigned to face the judgement of the electorate. Drayson then promptly resigned to spend more time with his racing cars and nobody said a word about the public service ethos so signally lacking in these lightweight mates of the powerful. Drayson walked away with a free peerage and permanent seat in the British legislature.

Reed and Drayson were part of Blair's temporarily successful plan to make Labour electable once more by packing it with chaps with the right temperament and background. Out went horny-handed sons and daughters of toil. In came smooth types who'd been to Oxford or Cambridge and knew how to behave on an oligarch's yacht. To give them a little more credibility and to make it look like they were the people's choice, they were parachuted into deprived constituencies in the north, usually through the good offices of trades union headquarters with little connection to grass roots. Blair was MP for Sedgefield, while Peter Mandelson was MP for Hartlepool. These chaps would use their PPE degrees and ability to distinguish between a fish fork and a grapefruit spoon to ensure that ex-miners and textile workers would share in the bounties of the futures and sub-prime mortgage credit default swap markets that buoyed the economy in the late nineties. In return, they'd teach the proles not to be fat racists.* And we all know how well both of those projects worked out. 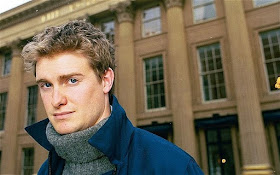 The poster boy of this was The Hon. Dr Tristram Julian William Hunt FRHistS, who has just resigned to become director of the Victoria and Albert Museum. The son of a Labour life peer, Tristram was sent to a private school, after which he beats the odds and dragged himself up to Cambridge, where he spent a lot of time at Footlights working on hilarious sketches with people who became cookie-cutter Radio 4 comedians, followed by a PhD. He then dropped out of the Establishment to spend a number of years emptying bins, working on oil rigs and answering the phones in a call centre, living on dripping sandwiches. No he didn't, obviously. He wrote some books which at first glance seemed like history but were actually nice stories about the past. Like so many other leading socialists, his political big break came from getting a job at Labour HQ, which ensured pretty quickly that the people of Stoke on Trent – virtually all of them Labour voters at that point – woke up one day to find that through no fault of their own he was their new MP.

How's that worked out? Well, they aren't Labour voters any more: Stoke-on-Trent Central went from being one of the safest Labour seats in the country to being a very marginal constituency, with terribly low turnout, so inspired are they by politics as Tristram practiced it. 66% of Potters voted to leave the EU and UKIP is coming up fast. A city with a glorious past in manual work (coal and steel) and famously highly-skilled labour in the ceramics industry is now packed with unemployed and underemployed people. They're poor and unhealthy. The city is a mess: badly run, semi-derelict, fuelled by exploitative low-wage industries and abandoned by central government. Whatever the benefits of globalisation, they passed Stoke by. Its population isn't stupid: they watched their jobs disappearing overseas without the government lifting a finger to save or replace them, and they worked out that they were disposable: their votes for the BNP in the 90s and UKIP now should be seen as howls of fury from a people who couldn't get the attention of their rulers in any other way.

And then there's Tristram. In he came with his lantern jaw and boyish good looks. A man who'd written several zippy books which mentioned Stoke as an example of Victorian manufacturing prowess. Would he stand up for a proudly working-class city with a progressive history? He would not. He made some documentaries, he had some photo-shoots with like-minded soi-disant saviours, and then there came the day when he crossed a picket line of his own academic colleagues to deliver a lecture on…Marxism. To this sometime Stokie, he was a diffident nonentity: shamelessly profiting from the machinations of Labour HQ and the weakness of the local party, and yet incapable of justifying his existence by growing into the role in the way a better politician might have done. No doubt he adorned some social gatherings and had quiet words with his establishment contacts, but he was a political blank space, petrified by his inability to object, let alone develop alternatives, to the economic and political cyclones that destroyed his voters' existences. He behaved like a Victorian missionary come to civilise the natives (I always mentally dressed him in a safari suit and solar topee) when in fact the natives had a long history of artistic, political and moral sophistication (William Morris was a frequent visitor and admirer of Stoke's artistic skills) and they were baffled by this expert on Marxism who had absolutely nothing to say about the economic base being demolished before their very eyes. Whatever political instincts he possessed, they were not democratic. His seat was an unearned sinecure and he behaved as though politics should be the preserve of decent chaps who understood each other, practiced behind closed doors over cups of tea - well-meaning perhaps but patrician at best.

And now he's gone, off to V&A, where he can surround himself with the products of bygone Stoke-on-Trent without being inconvenienced by the cries of their abandoned and embarrassing descendents.

Now you might think that my shrill, bitter and resentful interpretation of the Gilded Life and Times of Tristram are motivated by class envy and jealousy. And you'd be right. But there's more to it than that. Some of the greatest Labour Party people were much posher than Tristram: Clement Attlee attended Haileybury, was an officer in the first world war and never picked up a hoe. And yet Attlee, having worked in the East End of London, devoted his entire life to transforming the lives of the poor, with whom he'd worked, fought and lived. He started out at a social mission founded by his school, a pure product of the patrician wing of Victorian radicalism. Tristram isn't like that. He has the looks, origins and training of that class of de haut en bas saviours, but his commitment to public service turns out to have been skin deep. John Profumo was publicly disgraced and atoned for his sins buy devoting himself to invisible public duties. Not so Tristram, whose stint in Stoke is akin to collecting enough tokens to qualify for Higher Things. He's done his time amongst the chip-eaters and his reward is a comfortable chair at the heart of the establishment, where he'll be able to turn over plates at the V&A and nod knowledgeably at the trademark, while his peers appreciatively murmur 'Stoke…he's been there, y'know'. He's earned his stripes. He's lived amongst the savages and now he's back to reap the reward. Soon a peerage will come along, perhaps the occasional government report, then the Mastership of one of the less flashy Oxford or Cambridge colleges to tide him over in semi-retirement. In the meantime, Stoke will decline further; its voters will hopelessly tick the box of some feistier bigot and its civic fabric will continue to decay, out of sight and out of mind.

I don't think that people who went to private schools are unqualified for public office, or that the haute-bourgeoisie can't serve the needs of the working-classes with verve and dedication – but I do think that this shameful phase of class tourism at the top of the Labour Party did nothing for them people at the sharp end of neoliberalism. They were used, and a better way must be found. For that reason, I won't miss Tris.

*You and I know that the proportion of working-class racists was pretty low, and that working people were always in the vanguard of anti-racist and internationalist movements, but New Labour decided to assume that they were all reactionary scum who needed placating. Add that attitude to the continued existence of the Daily Mail and the Sun and you get a self-fulfilling prophecy.
at 14:34
Share